About the event: Within the beautiful surrounds of Government house ballroom guests arrived to the tones of the WA Police Pipe Band. Following the formalities, comedian Dave Callan had the crowd in fits of laughter before enjoying meals served by Beaumonde Catering.

Following the auction, the dance floor was packed with DJ Rony Ronald a big hit! Guests enjoyed a dessert table with treats from Bites by D and Cocoa and Spice.

About the event: This event called for a complete transformation of Curtin Stadium (Basketball Courts) to Ballroom. On arrival guests enjoyed pre dinner drinks and live entertainment courtesy of James Morley. MC Geoff Hutchison then introduced Basil Hanna, Parkerville CEO to begin proceedings reminding the crowd of the importance of the cause.

Meals were served by Beaumonde Catering and followed by a Raffle, Silent Auction and Live Auction.

It was then time for James Reyne and band to grace the stage. The crowd loved listening to some old classics, up dancing most of the night! The evening concluded with Rumour Has it, a local vocal trio entertaining guests. 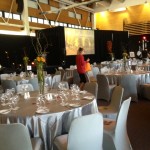