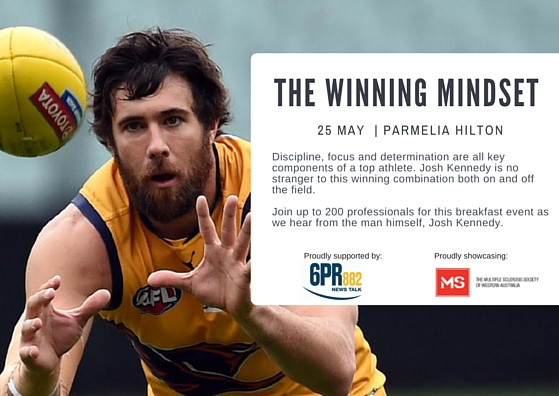 Discipline, focus and determination are all key components of a top athlete. Josh Kennedy is no stranger to this winning combination both on and off the field. Join us as we hear about Josh’s experience in managing his elite level of athleticism, high media profile and running his own business.

This event offers an opportunity to network with up to 200 Perth professionals and focuses on the path to success and tools required. Ideal for Mid-Senior level professionals, business owners and those with a general interest in business or sport.

What does it mean to have a winning mindset?

A winning mindset is essentially an attitude of mind. With the right mind-set you will live, work and compete at your full potential. Virtually everything you do in your life is ruled by choices that you make. You can choose to focus on the negative or the positive; you can get stressed about things beyond your control or you can focus on the things that you can influence. An obstacle can be a barrier to performance or it can be an opportunity to learn and improve. These choices will have a direct impact on your performance and well-being.

MC: Caty Price is a TV presenter, lifestyle reporter & journalist with over 13 years experience in the media. She made her name as a frontline sports reporter for Network Ten. She now works as a freelance presenter for Network Ten, Channel Nine & Fox Sports News in a variety of roles including travel, lifestyle & sport.

Speaker: Josh Kennedy’s early roots were in basketball, where parents Jenny Peterson and Jamie Kennedy both national professional players. Playing both basketball and football growing up and representing WA as an under-16. Concentration then turned to football, playing for Northampton in the GNFL and was named in the under 18 All-Australian team in 2005. Whilst playing for the East Fremantle Football Club in the WAFL, Josh was recruited to Carlton as the fourth pick in the 2005 National Draft. After playing 22 games, Josh was traded in 2008 to West Coast Eagles, in a deal that involved the club’s captain at the time, Chris Judd. Establishing himself as a key forward he became the club’s leading goal kicker during 2011, 2013, 2014 and 2015 seasons. Josh has played 165 AFL games and kicked 368 goals and was the AFL’s Coleman Medal winner in 2015. A previous owner of Josh Kennedys Small Moves and Sleepys Osborne Park, Josh has taken an interest in business and has been enjoying learning its highs and lows along the way. Josh is also an ambassador for the Multiple Sclerosis Society of WA.

He has held this position since 2002.  As CEO, he is focused in fulfilling a charter to improve the quality of life for people with MS and other neurological conditions and to help seek the cause and cure for MS.

In 2014, Marcus took up the position of Chief Executive Officer of the South Australia & the Northern Territory.

Marcus is also the Chair of the State’s CEO Roundtable in WA.  He sits on the General Council of the Chamber of Commerce and Industry and the State Committee for National Disability Services.